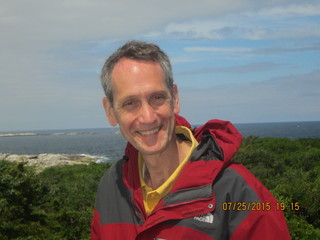 The author of several highly praised nonfiction books, Harry Haskell made his debut as a writer of creative nonfiction with Maiden Flight, the heart-warming story of Katharine Wright, the little-known "Wright Sister," who left her world-famous brother Orville to marry the man she loved. Katharine is also the subject of his new podcast, In Her Own Wright.

"Haskell imaginatively makes what was already an interesting triangle even more emotionally gripping. This slow burn of a story draws readers in more deeply with each page and makes Katharine truly the most intriguing Wright of them all."--Booklist

Click on the link above to listen to Harry's interview with Vick Mickunas, host of WYSO's Book Nook.

Click on the link above to read an author Q&A about Maiden Flight.

Harry Haskell is a prize-winning author, editor, and cultural commentator who writes authoritatively on a wide range of topics, from American history to the revival of early music.

A former acquiring editor for Yale University Press and classical music critic for the Kansas City Star, Haskell is the grandson of the Star's Pulitzer Prize-winning editor, Henry J. (Harry) Haskell. His previous book, Boss-Busters and Sin Hounds: Kansas City and Its “Star,” winner of the 2009 Missouri History Book Award, tells the colorful story of the newspaper’s rise and decline in the first half of the 20th century. In Maiden Flight, he focuses on a more intimate and dramatic subject: his grandfather’s love affair with Katharine Wright, sister of the world-famous Wright Brothers, and the tragic rift their marriage caused with her highly possessive brother Orville.

Haskell is also the author of two nonfiction books on musical subjects: The Early Music Revival: A History, which received full-page reviews in the New York Times Book Review and the London Times Literary Supplement; and The Attentive Listener: Three Centuries of Music Criticism, which Choice magazine praised as a “brilliant selection of articles [that] should prove useful to students and intriguing to researchers.” The French edition of The Early Music Revival, titled Les Voix d’un renouveau, won the 2014 Prix des Muses in musicology awarded by the Fondation Singer-Polignac in Paris.

Maiden Flight, based largely on Katharine Wright’s articulate and highly revealing love letters, straddles the line between historical fiction and creative nonfiction. As such, it represents a fresh departure for the author. But whatever genre his books fall into, Haskell considers himself first and foremost a storyteller who aims to bring historical personalities and events to life for contemporary readers. He is currently at work on a biography of the early-20th-century attorney and social activist Frank P. Walsh, a stalwart champion of organized labor and civil liberties who was one of the Progressive Era’s unsung heroes.

In addition to working as a free-lance book and journal editor, Haskell is a regular program annotator for Carnegie Hall in New York, the Pierre Boulez Saal in Berlin, and other concert venues. An avid cellist and gardener, he lives in Guilford, Connecticut, with his wife, Ellen Cordes, a librarian at Yale University’s Lewis Walpole Library.