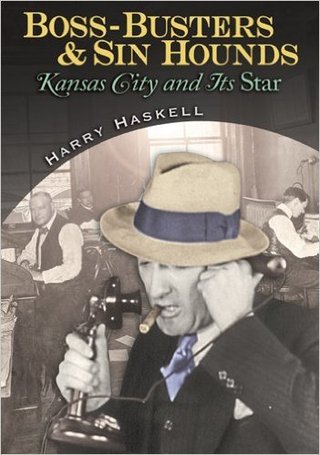 Click on this link to read an excerpt from Boss-Busters and Sin Hounds:

Boss-Busters and Sin Hounds: Kansas City and Its "Star"

At the turn of the 20th century, the Kansas City Star was a trust-busting newspaper acclaimed for its crusading progressive spirit; fifty years later it was a busted trust, targeted in the most important antitrust action ever brought against an American daily. Haskell, the paper's former music editor, tells the tale of the Star's rise and decline against the richly textured backdrop of Kansas City—the story of how a newspaper and a city grew together and ultimately grew apart.

Boss–Busters and Sin Hounds takes readers into the city room and executive offices of one of the most respected American newspapers, whose influence extended beyond its own community to international affairs. Re-creating life at the Star from the inside, the book traces the shifting fortunes of a great newspaper and the compelling “power of purpose” it exerted from the birth of the progressive movement in the 1880s to the 1950s.

This fascinating tale—with underlying themes of sin and redemption, high-minded ideals and gutter politics—is populated by a cast of larger-than-life characters, ranging from power brokers to presidents and including such Kansas City notables as Democratic boss Tom Pendergast, real estate developer J. C. Nichols, and labor attorney Frank P. Walsh. But at heart this is the story of three men with contrasting personalities and agendas who shaped the newspaper over more than three-quarters of a century: William Rockhill Nelson, among the last of the great “personal” editors from journalism’s golden age; the scholarly Henry J. Haskell (the author's grandfather), who led the Star to its peak of influence in the 1930s and ’40s; and Roy A. Roberts, who went on to combine the roles of newspaper publisher and political kingmaker.

Along the way, Haskell recounts such milestones as the Star's role in the City Beautiful movement that helped transform America’s urban centers; the nation’s entry into two global wars; a bold but ill-starred experiment in employee ownership; and the paper’s on-again, off-again battle with Boss Pendergast’s legendary political machine. And he brings into focus issues that remain timely today, from social and political reform to the very role of newspapers in a democracy, while also drawing parallels with recent American history—disillusionment with liberalism, the hijacking of the GOP by the far right, America’s go-it-alone attitude—that are as alarming as they are instructive.

“In today’s era of newspaper takeovers and corporate media empires, it is refreshing to be taken back to a time when an owner such as William Rockhill Nelson could dominate a newspaper and a region, Kansas City, with a crusading voice. . . . But, as Harry Haskell shows in this rollicking history, the time of newspaper independence is long over.” (Robert Miraldi in the Journal of American History)

“Writing the history of a city through a study of its dominant newspaper is a wonderful idea, but difficult to pull off. Harry Haskell has pulled it off. . . . It is difficult to imagine any history of Kansas City surpassing Haskell’s for its verve and its scope.” (Steve Weinberg in the Kansas City Star)