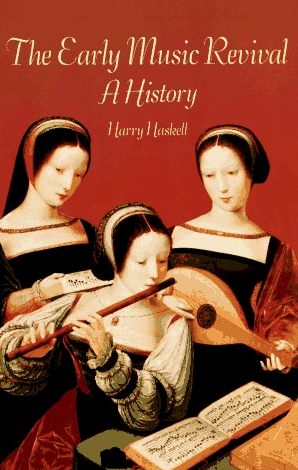 The Early Music Revival: A History

Hailed by the New York Times as "a book full of information and ideas," The Early Music Revival is a comprehensive study of the historical performance movement, tracing its origins back beyond 19th-century antiquarianism to the 18th century. Based on extensive original research, as well as interviews with leading artists and scholars in Europe and the United States, the book scrutinizes major figures and trends in the early music revival, and assesses the remarkable impact they have had--and continue to have--on mainstream musical life.

Written in a lively and entertaining style that "makes characters spring off the page" (Classical Music magazine), the book covers such topics as Mendelssohn's critical role, in 1829, in the "rediscovery" of Bach's St. Matthew Passion; the impact of the Schola Cantorum of Paris, founded by Vincent d'Indy and others to promote the study and performance of early religious masterworks; the pioneering work of Arnold Dolmetsch and other instrument makers; the influence of such early-music celebrities as Wanda Landowska, Alfred Deller, Christopher Hogwood, Jaap Schröder, and Jordi Savall; plus controversial issues of "authentic" performance philosophy that continue to be hotly debated.

Described in its 2013 French edition, Les Voix d'un renouveau, as "a veritable legend in the Anglo-Saxon world," Haskell's book won the prestigious Prix des Muses in musicology awarded by the Fondation Singer-Polignac in 2014.

“This fine book has established [Haskell] as an important writer in our field. . . . Although a serious historical study, it is written with journalistic energy. Although full of facts and thoughtful analysis, it urges you forward with human interest elements. Neither scholar nor casual reader will want to put it down.” (Brent Wissick in the American Recorder)

“A splendidly organized and entertainingly written survey which should stimulate much debate.” (Nicholas Kenyon in the London Times Literary Supplement)

Actes Sud
Click on the link above for information about the French edition of The Early Music Revival.